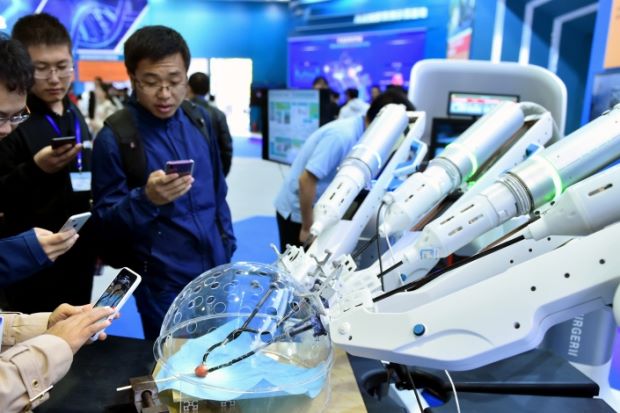 Beijing is accelerating its lawmaking process to consider draft legislation to protect the intellectual property rights of foreign investors, encourage voluntary transfers of technology but prohibit forced technology transfers by administrative means, to address key demands by Washington to reach a deal to tend of the trade war with the United States.

The draft of the foreign investment law, which was submitted on Sunday to the Standing Committee of the National People’s Congress for its first review, stipulates that all government support policies will also apply to foreign funded firms, who will get an equal opportunity to join the process of making standards and also take part in the government procurement, the state-owned Xinhua News Agency reported.

It marks an improvement on the previous draft, which was released by the Ministry of Commerce in January 2015 for public opinion but never enacted into law.

For instance, the government will now rely on a “negative list” – a list of projects or areas in which foreign investment is prohibited – rather than a project-by-project approval process or annually released investment catalogue, justice minister Fu Zhenghua explained to the legislature.

Although the government will still have the right to expropriate the property of foreign investors under special circumstances, the new draft law requires that the process must be done through legal procedures and include “fair and reasonable” compensation.

Importantly, a clause on protecting intellectual property was recently added to the draft, addressing a major issued at the core of the trade war.

“(China) encourages technology cooperation based on voluntarily agreed terms and business practices. The terms should be negotiated by the investors and administrative measures forcing technology transfer are prohibited,” Xinhua reported.

A lack of market access, an uneven playing field favouring domestic firms and the lack of intellectual property protection have been key complaints of the United States.

Shu Yujing, a China representative of US law firm K&L Gates, said foreign firms have waited for a long time for a law that better protects their interests, but it is unclear how long it will take for the law to be passed and implemented.

“There’s no detailed regulation on how many reviews of the top legislature any draft law has to undergo before its enactment. Given the recent pressure (from the US), it could be rolled out over one or two years,” she said.

Despite the progress, foreign firms will still face many obstacles to defend their intellectual property rights. Plaintiffs have to collect evidence of violations and submit them to Chinese courts, which is different from the US where defendants are forced to prove their innocence through a discovery procedure, said Shu, who has represented many foreign firms in trademark and patent cases in China.

In addition, the punishment for violations – particularly the size of fines – is not sufficient, she added.

Having repeatedly criticised Beijing for only paying lip service to the problems, Washington launched a series of retaliatory steps earlier this year to try to force China to make the changes.

On Dec 1, Chinese President Xi Jinping and US counterpart Donald Trump agreed on a 90-day truce at the G20 summit in Argentina to allow for negotiations to solve the issues at the heart of the trade war.

Both sides are now actively preparing for formal negotiations to reach a deal before the March 1 deadline.