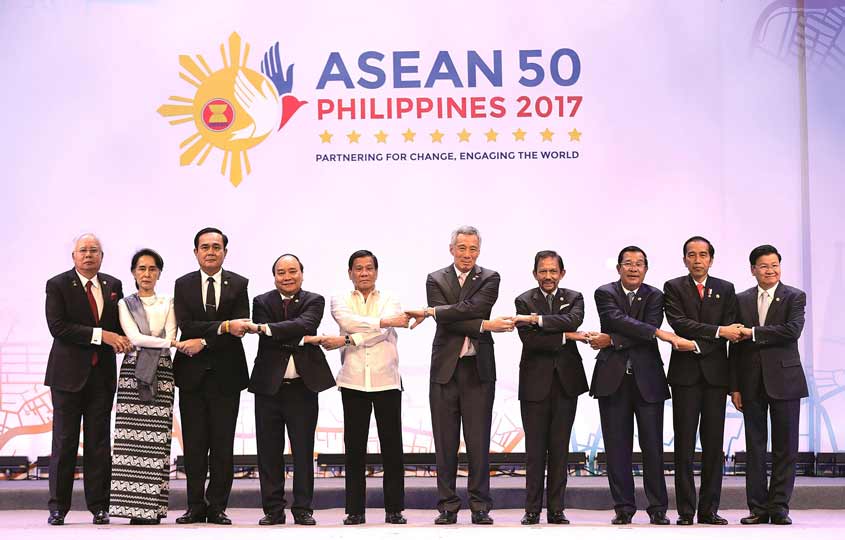 A group of five countries with a common dream of peace: this was how the Association of Southeast Asian Nations, or ASEAN, began 50 years ago on August 8, 1967, in Bangkok, Thailand. This historic milestone in regional relations formalized the rather loose community of countries, originally composed of Indonesia, Malaysia, the Philippines, Singapore and Thailand, which until then had been exploring different region-building options.

From the outset, member states of ASEAN have been diverse in language and culture, strengthened nevertheless by different but shared histories and a common desire to improve the lives of their people. Back in 1967, the world was riding on the promise of a relatively young United Nations forged from the tragedy of the Second World War. And while the conflicts of a bipolar world played out, casting a cloud of uncertainty across the globe, ASEAN began carving a path of collaboration to secure its future. At that time, the combined GDP of ASEAN was just USD 23.7 billion, political institutions were still evolving and infrastructure was underdeveloped. The birth of ASEAN was indeed a defining moment, born of the courage and foresight of the region’s leaders.

The membership of Brunei Darussalam in 1984, Viet Nam in 1995, the Lao People’s Democratic Republic and Myanmar in 1997 and Cambodia in 1999 completed the organization and further consolidated its institutions. Economic integration, anchored by extensive dialogue and cooperation in the political-security and socio-cultural fields, continued to galvanize relations within ASEAN and between its member states and other major economies in the region.

Such integration was further strengthened with the establishment of the ASEAN Economic Community in 2015. The Community had by then grown to a population of 629 million with a combined GDP of some USD 2.4 trillion, making it the sixth largest economy in the world and the third largest in Asia. In 2015, ASEAN trade also rose to USD 2.3 trillion, the fourth largest share in the world after China, the United States and Germany. Meanwhile, foreign direct investment totaled USD 121 billion, accounting for 7 percent of global inflows.

This remarkable growth did not come about by chance. Rather, it was the result of the systematic implementation of comprehensive measures in support of economic integration, including harmonized procedures on customs, immigration and trade. It was also thanks to a strategy that clearly acknowledged the varying levels of development of member countries and that actively sought to create opportunities for less-developed members to catch up. At a time when the world is increasingly toying with protectionism, ASEAN continues to shine a bright light on economic integration, inclusion and openness.

ASEAN has identified intellectual property (IP) as a fundamental element of the ASEAN Economic Community Blueprint 2025, which sets out specific steps to be taken by member countries to transform ASEAN into a highly innovative and competitive region.

ASEAN recognizes that IP provides a good starting point for member states to encourage innovation as part of a comprehensive package of national and regional economic incentives. Countries like Malaysia, the Philippines, Singapore and Viet Nam have launched IP awards that lend prestige their best innovators and innovative practices. By protecting original ideas and works, IP laws and regulations allow businesses, entrepreneurs, inventors, artists and creators to flourish in a fair environment that enhances public access to a competitive market of goods and services. Moreover, the World Intellectual Property Organization (WIPO) presented the WIPO Global Leaders Award to His Majesty King Bhumibol Adulyadej on January 14, 2009 in recognition of his dedication to using intellectual property to help Thailand develop: more than 4,000 Royal Projects utilizing IP have benefited not just Thailand but other countries as well.

The development of a balanced and well-founded IP strategy – one that frames policies and programs in support of national development priorities – is a significant step toward ensuring that IP works for everyone. In this regard, countries like Indonesia, the Lao People’s Democratic Republic, Myanmar, the Philippines and Viet Nam have ongoing cooperation with WIPO to enhance their respective national IP strategies. This is a long-term process that requires the active support of all stakeholders, including the private sector, government and the individual purveyors of original ideas themselves. From technology that converts mango waste into commercially viable products to a resurgence of ASEAN motifs in global designs, IP provides the incentives required to ensure a constant flow of original creative works that ultimately contribute to social well-being and the public good.